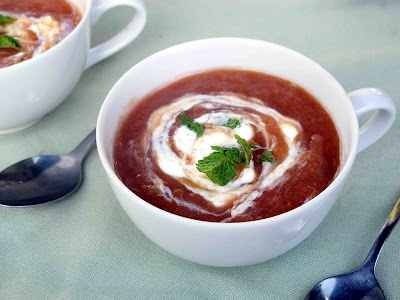 In the sixties chilled fruit soups were fashionable at dinner parties but soon they went out of vogue again. This afternoon I picked some rhubarb from the garden and decided to revive the idea and create a rhubarb soup. It made a very refreshing starter before we had our barbecued steak, corn,green salad and baked potatoes. But any leftover soup is equally good for dessert. For this you can whizz some strawberries into it leaving them slightly chunky to add some texture

It is usually a good idea to remove the stringy bits from the rhubarb with a potato peeler but  because it was fresh out of the garden I didn't bother and once whizzed in the food processor it was quite smooth.

Using a fine grater remove the rind from the orange
Juice the orange
Bring the zest of the orange, the orange juice , the chopped rhubarb, the brown sugar and the water to the boil. Then cook for about 10-15 minuts until the rhubarb starts to fall apart.
Let cool slightly before whizzing until smooth in a food processor/blender.
Put into a bowl and put it into the fridge until it is chilled.
Serve in bowls with a dollop of thick Greek Yoghurt on top and garnish with chopped mint.