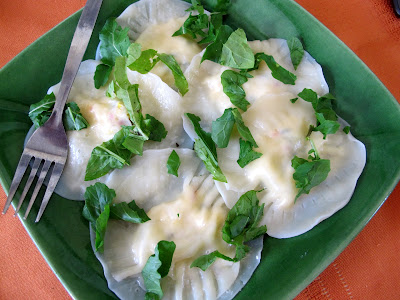 In a Bunny Eats Design post Genie boldly declared "Authenticity is nothing". Then she shared a great recipe for dumpling wrapped prawn ravioli. Italian? Chinese? does it really matter. In our kiwi kitchens you'll find a global table that mixes and matches with gay abandon. As long as it tastes good, and uses fresh and mainly local ingredients I'm all for it.
They sounded so delicious I wanted to make them at once! But as usual I didn't have the right ingredients to hand. What I did have was a packet of dumpling wrappers which had been lurking in my fridge for a week after a visit to our local Asian supermarket. Then I scrounged around in the garden and kitchen and used what I had to make these Dumpling wrapped corn, feta and basil ravioli. They were such fun to make that no doubt all sorts of other fillings will evolve.
http://bunnyeatsdesign.com/2013/02/13/dumpling-wrapper-ravioli/
I followed her basic technique  which you can read for yourself on the above link. But I did put the dumpling skins on a silicone sheet as they do have a tendency to stick. A lightly greased plate/tray would have also done.

Hold the corn cob under running water and shake. Microwave for 3 minutes. Peel back the husk and leave to cool a little before scraping the corn into a bowl.
Put 1/2 of the dumpling wrappers on a silicone baking sheet/lightly greased tray.
Mix the  crumbled feta with the cream
Add all the other filling ingredients and mash together with a fork.
Put walnut sized balls of the filling in the middle of each wrapper
Brush the edges with milk
Brush the other dumpling wrappers lightly with milk with a pastry brush) and put on top.
Press the edges together, and then press around the edges with a fork to make a decorative pattern on the edges.

To cook them I used a wide bottomed saucepan
When the water boiled I carefully placed some of the ravioli in a single layer.
Then I let the water come to the boil again before lifting them out with a slotted spoon onto a plate .
The process was repeated till all were all done
Finally they were sprinkled with some rocket
They should be served while still hot.

Genie added a little sauce to hers made from butter, chopped garlic and lemon juice which sounded divine . But I rather liked mine garnished with just some rocket.