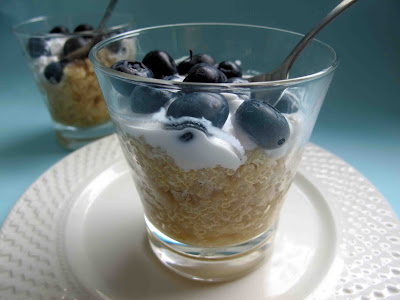 A healthy breakfast gives you a great start for the day. For a special treat try my version of blueberry, coconut and quinoa porridge. It’s not only delicious, it’s health in a bowl.
Three of the main ingredients are:
Blueberries: A Superfood which is one of the richest sources of natural antioxidants, more than twice the level of other berries.
Quinoa: An ancient grain which has been cultivated for thousands of years in the Andes and was prized by the Incas. It has a nutty taste and aroma and is high in protein and fibre
Coconut Oil: Use virgin coconut oil which has not been chemically treated (other kinds of kinds of coconut oil have been partially hydrogenated which creates those nasty unhealthy transfats.) Virgin coconut oil contains about 50 percent lauric acid, a medium chain fatty acid which is also abundantly found in breast milk. What’s good for babies is good for you!
Ingredients:
1 cup of quinoa
2 cups of cold water (check cooking and proportions)
1 punnet of blueberries (or more according to how fruity you would like this breakfast to be)
½ teaspoon of cinnamon
1 tablespoon of coconut oil (I used Celebes Virgin Coconut Oil)
1 tablespoon of honey
1 pinch of salt (optional)
1 lemon
Coconut cream ( 1-2 tablespoons per bowl)
Method:
1. Wash the quinoa in a sieve under the tap
2. Add it to 2 cups of water and bring to the boil.
3. Put a lid on the saucepan and leave it to simmer. Check after 10 minutes
4. Let it simmer on a low heat for about 10- minutes. It may need a little longer. Little tails will appear on each grain when they are done.
5. Remove from the heat and stir in 1 tablespoon of coconut oil, 1 tablespoon of honey, the cinnamon and a pinch of salt.
6. Ladle into small bowls . Squeeze a few drops of lemon juice over the top.
7. Then pour over 1-2 tablespoons of coconut cream.

8. Sprinkle blueberries on top.
Posted by Shoot and Eat at 14:20