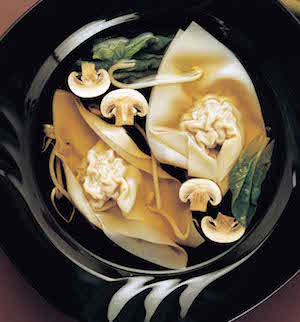 Making wonton soup together is a great way to keep grandchildren and grandparents happily occupied for a few hours in the holidays!
The recipe comes from Simon and Alison Holst’s latest cookbook: Everyday Easy 100 Soup Recipes.
This large collection of Holst family favourites was gathered over many years. Included are golden oldies like Grandma’s farmhouse soup which used to simmer away on the back of a wood burning stove (but is easier and just as tasty made in a slow cooker today) as well as new ones which show the influence of Asian cuisine on our soup kitchen. Some come in multiple versions. There are five recipes for pumpkin, seven for lentil and eight bean soup recipes.
We took a shortcut when making this soup as there were a lot of other activities we wanted to pack into the week with our granddaughters. So we used a good quality bought chicken stock instead of making our own.
Mastering the art of filling and shaping the wontons wasn’t too difficult.  We soon got into a rhythm and filled a baking paper lined tray ready to lower them gently into the flavoured stock.
A good thing about this soup is that it can easily be adapted to different tastes. Our granddaughters all have some vegetables they like and some they hate. We finished up pleasing everyone by using just broccoli and mushrooms.
The end result was bowls of tasty soup filled to the brim with wontons and vegetables, such a healthy and tasty lunch!
Everyday Easy 100 Soup Recipes will be well used at our house this winter. Our granddaughters have already picked out the soups they want to try next. And that’s fine with me as you can always rely on a Holst recipe to be family friendly, reliable, inexpensive and tasty.
Wonton Soup
Reproduced from Everyday Easy 100 Soup Recipes by Simon & Alison Holst, published by Hyndman Publishing, RRP$34.99, available nationwide
This soup was very popular with several generations of our family. For a real treat, we would buy the wonton wrappers at a specialty Asian food store (now you can get them at most supermarkets!) then make the soup together.
For 4 large main or 8 starter servings:
4 cups cold chicken stock (homemade recipe attached)
2 cups prepared vegetables (e.g. mushrooms, bean sprouts, spring onions, small spinach leaves, snow peas)
4 cups water
1 Tbsp soy sauce
1 Tbsp sherry
½ tsp salt
32 wonton wrappers
Wonton Filling:
250g pork or beef mince
1 Tbsp oil
1 Tbsp sherry
1 Tbsp soy sauce
1 tsp cornflour
1 tsp sesame oil
¼ tsp salt
4 spring onions, chopped

➊ Put the chicken stock and thinly sliced vegetables in a large pot and set aside.
➋ In a large frying pan, heat the water, soy sauce, sherry and salt until simmering.
➌ To make the filling, mix all the filling ingredients, then divide into 32 small portions, as evenly as possible (cut mixture into 4, then 8, then 16, then 32).
➍ Place a portion of filling in the centre of a wrapper then fold in half diagonally to form a triangle. Dampen one folded corner with water.
Hold folded corners between thumbs and forefingers. With one middle finger, press filled area gently so the dampened corner can be brought towards then under the other folded corner. Pinch together firmly.
➎ After you have made 4–6 wontons, drop them gently into the boiling liquid in the frying pan, jiggling the pan so they do not stick to each other or the pan.
➏ Cook for 5 minutes after liquid returns to the boil. Lift each, with a slotted spoon, into cold chicken stock when cooked. Prepare and cook the rest of the wontons, then pour the remaining liquid from the frying pan into the pot.
➐ To serve, heat carefully until the wontons have just heated through, then ladle into bowls. Sprinkle with chopped coriander leaves, if desired.
Chicken Stock
Freeze raw chicken trimmings and giblets (except livers which make bitter stock) in a bag in the freezer, adding to the bag until it is full. Alone, or with fresh chicken backs bought specially, they make good stock, as long as other flavourings are added.
For 8 cups:
about 1kg raw chicken bones, chicken backs, skin, giblets, feet, etc
1 tsp finely chopped garlic
1 onion, peeled and chopped
2–3 bay leaves
about 12 peppercorns
4 whole cloves
12 cups (3 litres) water
1 tsp dried oregano, crumbled
1 tsp fresh or dried thyme
¼ cup coarsely chopped parsley
salt and pepper

➊ Simmer chicken with everything except the salt and pepper in a very large pot for 3 hours.
➋ Strain through a sieve and discard the solids. Skim off and discard the fat from the surface.
➌ Season to taste and refrigerate for up to 2–3 days or freeze for up to 6 months.
Chicken Bones Stock
The skeleton and other remains of roast, barbecued, grilled or baked chicken may be used to make useful, small amounts of good stock. Start cooking the stock while you do the dishes, while you still have the bones, drippings and vegetable trimmings from dinner close at hand.
For 2–4 cups:
cooked carcass, chicken bones, giblets, skin, fat, etc
1–2 cloves garlic, peeled and chopped
1 carrot
1 onion
1 stalk celery, optional
1 Tbsp light soy sauce
½ tsp salt
6 peppercorns (or 1 dried chilli)
water to cover
➊ Put all the chicken remains in a fairly large pot, with any cooking juices scraped from the original cooking pan, and any suitable vegetable trimmings.
➋ Add the ingredients listed, cover and simmer for about 2 hours.
➌ Strain off stock and refrigerate for short storage or freeze in covered containers for up to 6 months.
Reproduced from Everyday Easy 100 Soup Recipes by Simon & Alison Holst, published by Hyndman Publishing, RRP$34.99, available nationwide
Review By Lyn Potter.

This review was written for the GrownUps website and and may also be viewed there at
https://www.grownups.co.nz/wonton-soup/ 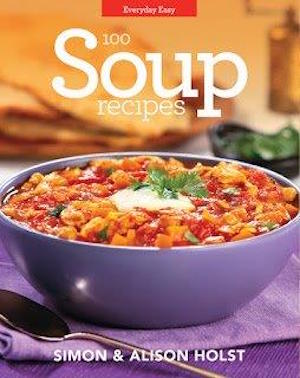