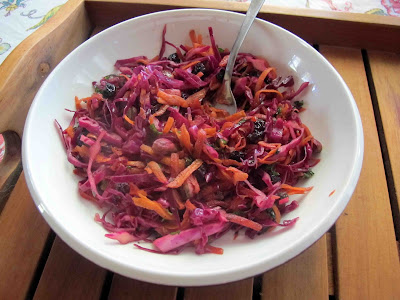 This crunchy colourful healthy salad is almost a meal in itself. I created it while I was playing with some Fresh As freeze dried blueberry powder this weekend.
The blueberry flavour was not as strong as I had hoped as the pomegranate molasses stayed dominant but it added some fruity depth.
I usually make this salad with orange juice but the freeze dried blueberry powder in the dressing made a nice change.

The next time I made it I added a handful of pitted and sliced cherries as they are in season right now turning it into very berry salad.