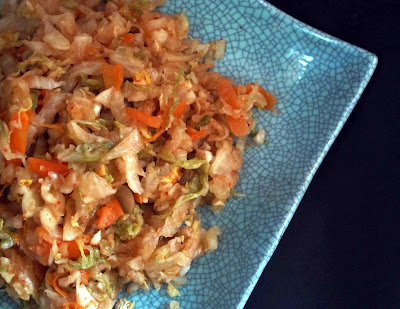 My kimchi is ready a little earlier than I thought it would be. My Korean hairdresser suggested that 5 days would be enough, even shorter in summer. Then pop it into the fridge. She makes kimchi at home all the time and eats it every day.

She also said that a turnip would have been good to add . I detest turnips so I'm glad that it was too late to take up her suggestion. And if you do add fish sauce it should be Korean she said. But she couldn't really explain the difference.

There is a dish which she suggested I make with it. As her English is poor, and my Korean nonexistent I'm not sure I got the gist of it, but it seemed to be made by mixing kimchi with rice and then frying it. If anyone has tried this I'd love to hear about it.

In the meantime I'm just going to do  what Jo Nolan who kindly taught us to make her kimchi recipe ( see a previous post)  suggested. Her advice "Start by eating a spoonful every day and build up the quantity gradually ."

Here isa link to my previous post on kimchi.
http://focussedonfood.blogspot.co.nz/2013/09/kimchi-dont-just-say-it-make-it.html