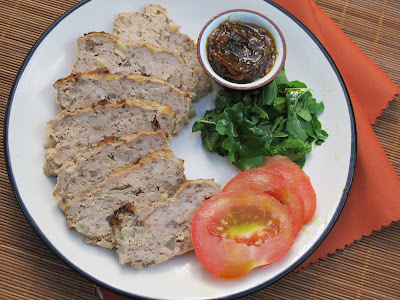 Here's a tasty lightly spiced pork and apple meatloaf. It's especially nice served with a feijoa chutney alongside. The magic ingredient is breadcrumbs made from Purebread Spicy Fruit Loaf. Which also conveniently makes it gluten free.
Nicest served hot but as it's a moist loaf it will happily sit in the fridge for several days.

1. Chop the onion finely and saute in butter till soft.

3. Put the breadcrumbs,  egg, tomato sauce, mustard  and salt and pepper in a large bowl.

4. Add the pork mince and mix well together.

5. Peel and chop the apple into small pieces and add.

1 .Put all the ingredients in a bowl and leave for a couple of hours for the sugar to dissolve and the flavours to mingle

2. Then put in a large heavy-based saucepan

3. Bring the mixture to the boil

4. Turn down the heat and let it simmer gently.

6. It will be done when the chutney looks thick and syrupy.

8. Let it cool before eating.

9. It will keep for a couple of weeks in the fridge.

10. Or it can be ladled  into sterilised jars,sealed and store in a cool dark place.