Cook With Me, a cookbook by Masterchef Aaron Brunet 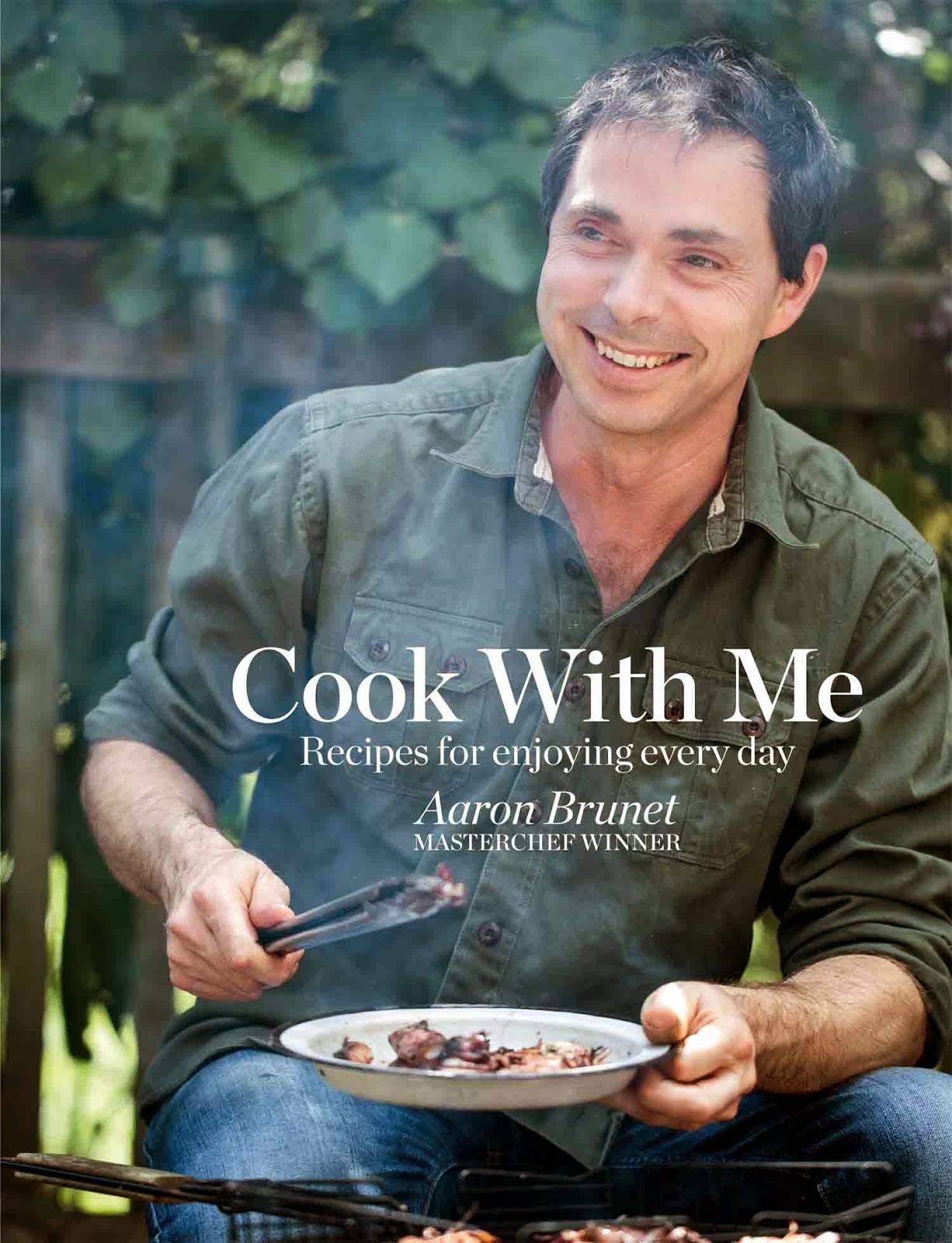 When New Zealand MasterChef winner Aaron Brunet began writing his cookbook he initially felt his recipes had to live up to the fancy dishes he had created for MasterChef.  He soon found himself tangled up in knots and things just didn’t turn out right.

He gave up and realised that this is not how he cooks at home. So he let go of the expectations and decided to just use the ingredients he had to hand, have some fun thinking about what he would like to eat and how he could put them together to make  simple meals that he would enjoy eating.

Once he did that, the book started to flow. The result is “Cook with Me” a cookbook in which he has shared the food he and his family love to eat at home.

Included are lots of quick and tasty meals for busy weekdays, more leisurely and inventive dishes which he and his wife and daughter love to make together on the weekend, some tasty vegetarian recipes and a Mexican feast.  Some are also derived from his European family heritage.

Here are some of our favourites:

Fish Cakes:
Aaron and his family live at Raglan by the sea so he often cooks fish. His fishcakes made with hoki and trevally served with a tartare sauce flavoured with dill, cucumbers and capers are affordable and delicious.
Olive and Tomato Scones

Most of us already have a favourite scone recipe but I was one over by his olive and tomato scones in which he has used vintage cheddar for its bite and gruyere cheese to give it a nutty sweetness.

Super Smoothies:
Aaron loves to make these after an intense yoga workout or as a pick me up in the afternoon. His recipe has a frozen banana, milk and yoghurt base to which (if you wish) you can add a sustaining mix of oats, flax seeds and blueberries. Or for a special treat add other flavourings like maple and walnut or coffee and muscovado sugar. If you are having a frail elderly day and don’t feel up to cooking this could well make a sustaining meal replacement

Zora’s Salad:
Aaron’s Mother Zora’s salad is a very flexible recipe. It starts with a layer of chopped tomatoes followed by generous amounts of both crisp and soft green salad vegetables, and herbs. The salad is tossed with a garlicky dressing made with olive oil, citrus juices and soya sauce.

Chilli Beef:
Part of his Mexican feast this is slow-cooked beef in a rich and spicy sauce with a dose of lime marmalade for sweetness.

Sourdough Bread:
It could be Aaron’s background as an IT consultant which has enabled him to describe how to make sourdough bread which can be fickle in such a meticulous and detailed way (it takes up 8 pages including hints!) As I write his sourdough starter is bubbling away on my sunny window sill.  It will need feeding for another week or so before I can use it but hopefully I should finish up with two big rustic sourdough loaves with a rich dark crust.

Pressure Cooked Popcorn:
Popcorn cooked in a pressure cooker?! This is one recipe which I have not yet been game to try. Aaron agrees that this is not your usual popcorn experience and is getting out on the fringes but he included it because he was fascinated by its incredibly earthy wholesome texture.

Time for a Change?

This is a cookbook full of creative affordable and tasty family recipes. It is not a vegetarian cookbook but it does focus mainly on fish, chicken, vegetables, fruit and grains.

The research shows that older people who eat a balanced diet, with lots of vegetables, fruit, whole grains, chicken and fish can have a better life expectancy and quality of life.

Even if up to now you have been a dedicated red meat and two veg person, it is well worth taking a look at Aaron’s healthy meals. You might well find you enjoy the journey and could then be on the way to a healthy and longer life.

Cook with Me by Aaron Brunet is published by Random House NZ (RRP $49.99)

I first wrote this review for my GrownUps column at