Pear Tarts from Little and Friday 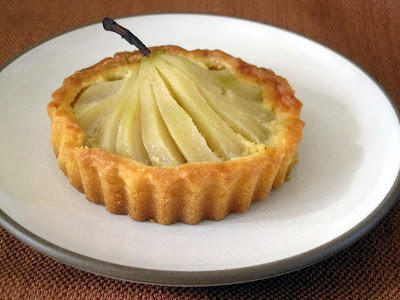 This very decorative dessert was baked by my sister in law Alison for a dinner last night at our house. The recipe made 8  individual tarts and looked amazing. It came from the Little and Friday recipe book in which there is a superb collection of treats.

Each sweet short pastry base was filled  with 3 tablespoon of frangipane.
The bottoms were sliced from each pear before poaching so they would sit flat. Keeping the tops intact vertical slices were cut from the stalk of each pear, making each one a few millimetres apart.
Then each pear was gently spread apart to make a circular fan.
A pear fan was put on top of the frangipane filling in each tart . The pear was twisting slightly so it extended to the edges. The tarts were baked for 30 minutes in a moderate oven.

It sounds rather complicated but the end result was well worth it.

In the original recipe the tarts were served with mascarpone but some of us ate them plain and some added a dollop of whipped cream.
Posted by Shoot and Eat at 21:29