A cup of Chai


A Cup of Chai 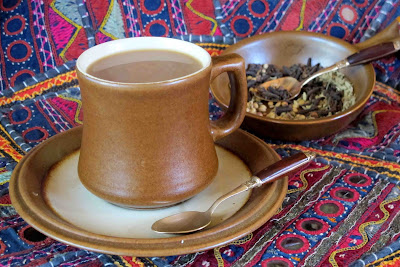 Masala chai (usually called chai for short) is a delicious spicy and aromatic Indian tea. It makes a healthy change from coffee.

A cup of chai tea does need sweetening to bring out the flavour of the spices. For this I prefer to use honey rather than white sugar. Chai is usually made with full cream milk but Trim milk is healthier.

There is no fixed recipe. In India where it may be served at any time of the day each family will create their own mixture of spices.

I like this combination of spices which was given to me by Rajnesh. Use it as a starting point and then start to experiment with other spices to make your own brew. Choose from cloves, cinnamon, star anise, peppercorns, ginger and fennel. But always include cardamom as this gives masala chai its distinctive flavour.

Rajesh's Masala Chai:
The amounts of spices and the ratio of water to milk are flexible but I started with the following quantities. This makes a not too spicy chai.

1. Lightly crush the cardamom pods with the back of a knife or a metal spoon to release the seeds.

2. Bring the water to the boil in a saucepan.

3. Add 2-3 teaspoons of black tea leaves (or if you don't have loose tea add a couple of tea bags).

4. Bring to the boil and simmer for 4 minutes

5. Add the milk and bring to the boil again

6. Strain the chai into a large mug and sweeten to taste with sugar or honey.

7. Stir with a cinnamon stick while you drink it.