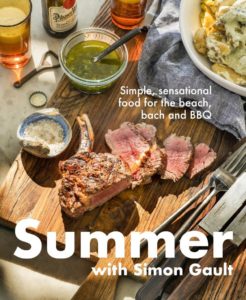 For Simon Gault’s new cookbook, he created food to be enjoyed in the company of friends and family at the beach, bach and barbecue.
A lot has happened in his life since he wrote his last cookbook six years ago. He has had to deal with a medical condition, has a beautiful young daughter called Hazel, and opened Giraffe, his new restaurant. These life changes have influenced his cooking so there are some healthier and child-friendly recipes this time around as well as those that would take a little more effort.
Christmas is not far off, so I was inspired to plan a Christmas dinner from his cookbook.
A couple of predinner nibbles
For those who have mates like Simon, who dive and often share their spoils, his crayfish and rice paper rolls would be amazing. Along with the crayfish they are stuffed with a fresh wasabi slaw and served with a dipping sauce of soy sauce and lemon juice.
But for most of us that won’t be an option so instead I tried out his Moorish Parmesan Puffs. These light and crusty little mouthfuls are best eaten straight out of the oven although they can be prepared earlier in the day and then reheated. Sprinkling them with sesame seeds before putting them in the oven is optional. We have tried them both ways and liked the extra crunch they provided.
The second nibble, smashed avocado on crackers with dried figs could not be easier. Smash two avocadoes with spring onion, lime juice, orange zest and jalapeno Tabasco sauce. Spread on your favourite crackers or toasted rye bread. In the original recipe, they are topped with figs, but these won’t be in season until February. Bright red cherry tomatoes, which are suggested as an option would, in any case, look more Christmassy. Garnish with fresh dill.
A glass of bubbly or one of Simon’s mocktails or cocktails would go down very well with these nibbles.
Tamarind Ginger Christmas Ham
Last year Simon decided to ignore tradition and made use of his much-loved pizza oven to produce his best examples of Neapolitan pizza. The reaction from some who came was that they had been subjected to some bizarre form of Christmas abuse so this year it’s back to more traditional fare and he will be cooking Tamarind and Ginger Ham.
Simon says, “The tamarind and candied ginger ham with the clover honey is sensational and should satisfy even the most critical, who should, by years’ end, have recovered from the pizza affront.”
Salad: Watermelon, Fennel and Blueberry.
Rather than roast vegetables we prefer crisp and colourful salads which I think better suit our summery New Zealand weather.
We tried his Watermelon, Fennel and Blueberry salad. Simon suggests that his recipes are not rules but guidelines from which dishes are grown so I played around with it.
It has elderflower honey in the dressing but that was not in my pantry. Clover honey, although lacking its floral perfume, was fine. I used a honeydew melon rather than a watermelon and added plenty of slightly peppery rocket from our garden just before serving which cut through the sweetness. I’d be very happy to put this on our Christmas dinner table.
Dessert: Christmas Berry Pudding
This luscious decadent dessert was specially designed by Simon for Christmas. The rum sauce which is folded through will hopefully satisfy those who feel nostalgic about a traditional Christmas pudding. It is so rich small helpings are called for and I would serve a fruit platter alongside.
That’s Christmas sorted. And for the rest of the summer, there are many more fuss-free recipes to choose from.
The lovely photographs of both the food and his daughter Hazel make it a very attractive book and an appealing Christmas gift.
I don’t think this book will be gathering dust on my bookshelf!
Summer with Simon Gault was written by Simon Gault. Publisher: Penguin Random House. RRP $50. 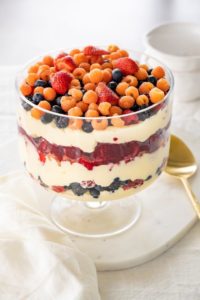 9 punnets mixed fresh berries (loganberries, boysenberries, raspberries)
½ cup limoncello
Simon’s Rum (or Brandy) Sauce (see below)
400g mascarpone
200g crème fraiche
1 packet savoiardi biscuits
extra berries, to garnish
This is a stunner — it’s a perfect summertime Christmas Day pudding. It features my famous Rum Sauce; if you’re not so keen on rum, swap it out for brandy.
Place 2 cups of the berries in a blender and purée. Pour the purée into a large flat dish and add the limoncello to thin the purée. Set aside.
In a bowl, fold together the Rum (or Brandy) Sauce, mascarpone and crème fraîche until combined.
Take a large, high-sided glass serving bowl and spread a layer of the rum sauce mix across the base. Then add a layer of fresh berries, then another layer of the rum sauce mix, then more berries.
Dip a savoiardi biscuit into the berry purée and place on top of the berries. Repeat until the berries are covered. Finish with another layer of the remaining rum sauce mix. Garnish the top with extra fresh berries.
Refrigerate until you are ready to serve.
Simon’s Rum (or Brandy) Sauce
1 cup cream
2 egg yolks
1 tbsp sugar
3 tbsp dark rum or brandy
bowl of ice
½ cup cream, whipped to soft peaks
In a small saucepan, heat 1 cup cream until small bubbles appear.
In a separate glass bowl, whisk together the egg yolks and sugar until pale and fluffy.
Pour the cream over the egg mixture, whisking constantly. Return this to the saucepan and cook over a very low heat, stirring with a wooden spoon until the sauce coats the back of the spoon (or it reaches 82°C). Add the rum or brandy.
Cool the pan in a bowl of ice and once chilled fold in the whipped cream.

My review of Summer by Simon Gault was first published on the GrownUps website
https://www.grownups.co.nz/life/food-wine-beverages/summer-with-simon-gault/
Posted by Shoot and Eat at 13:01