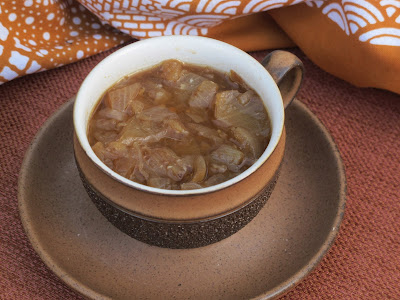 I am taking baby steps in introducing miso to my partner. He's a good kiwi bloke who favours sausages and roast dinners

Today I made him a Japanese French version of caramelised onion soup. It was a twist on a recipe from The Chopsticks Diet by Kimiko Barber. Instead of dashi I used chicken stock and ordinary onions (the red ones she used would have made it taste sweeter)

She added burnt tofu  (a firm cotton tofu that is scorched on the surface). For my partner that would have been going too far. But he really enjoyed this soup without it.

Garlic bread would have gone well with it, although I rather liked it with some toast spread with a mixture of Misomite and olive oil.

Combining chicken stock with Urban  Hippie's Miso to make a soup base came from Sarah. I thought it was a superb idea. Her original recipe can be found at:

I used Urban Hippie's Miso paste which is locally made and tastes really good.


Here is my recipe for Caramelised Onion Miso Soup.

Fry the onions in the tablespoon of oil over  a low heat for 15 minutes stirring them frequently to prevent burning.
Add the vinegars, sugar and soya sauce. Keep frying until almost all the liquid has been absorbed.
Pour in the chicken stock and bring to the boil.
Squeeze the miso paste into a small bowl and add a little of the soup. Stir until the miso is dissolved.
Pour it back into the pan.  Heat the soup until it is almost boiling.
Serve at once.