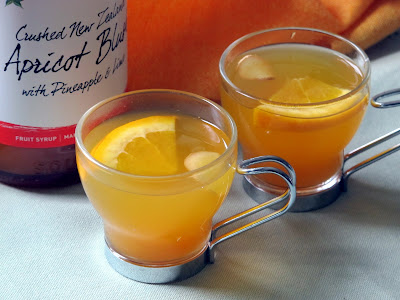 It's been a cold and rainy weekend so we've had fun creating hot toddies with Barker's Apricot Blush. It's made by Barker's of Geraldine and consists of  crushed local Central Otago apricots blended with tropical pineapple and lime. We made two for the adults and one for the kids.
Apricot Blush Hot Toddy:
Ingredients: Per person
1 teabag
juice of 1/2 orange
1 tablespoon of Barker's Apricot Blush (or to taste)
1 cup/glass  of hot water
1 cinnamon stick
1 slice of ginger
a  slice of orange ( quartered)
Method:
Put the juice of 1/2 orange into a cup/glass.
Pour in the boiling water.
Add a teabag and slice of ginger
Leave to steep for a minute or so before removing the teabag.
Float a slice of orange on top.
Stir with a cinnamon stick and serve while hot.
Apricot Blush and Brandy Toddy:
Proceed as above but omit the teabag.
Instead add a nip of brandy.
Eeny Weeny Toddies ( for the littlies)
Squeeze half an orange into each glass.
Add 1 tablespoon of Apricot Blush (or to their taste)
Fill the cup/glass with boiling water.
Float slices of orange on top.
Posted by Shoot and Eat at 16:46